Spirituality, Liturgy and the Tao of Inner Peace

YOGA!  I love it so much!  Where does yoga fit into a spiritual blog?  Yoga is so much more than just stretching or exercising yoga is a spiritual practice, and I want to share how it’s helped me and hopefully can inspire you to take up a practice.   Let’s first have a history lesson brought to us by Wikipedia:

Yoga (/ˈjoʊɡə/;[1] Sanskrit, योग Listen) is a group of physical, mental, and spiritual practices or disciplines which originated in ancient India. There is a broad variety of Yoga schools, practices, and goals[2] in Hinduism, Buddhism, and Jainism.[3][4][5] Among the most well-known types of yoga are Hatha yoga and Rāja yoga.[6]

The origins of yoga have been speculated to date back to pre-Vedic Indian traditions, it is mentioned in the Rigveda,[note 1] but most likely developed around the sixth and fifth centuries BCE, in ancient India’s ascetic and śramaṇa movements.[8][note 2] The chronology of earliest texts describing yoga-practices is unclear, varyingly credited to Hindu Upanishads[9] and Buddhist Pāli Canon,[10] probably of third century BCE or later. The Yoga Sutras of Patanjali date from the first half of the 1st millennium CE,[11][12] but only gained prominence in the West in the 20th century.[13] Hatha yoga texts emerged around the 11th century with origins in tantra.[14][15]

Yoga gurus from India later introduced yoga to the west,[16] following the success of Swami Vivekananda in the late 19th and early 20th century.[16] In the 1980s, yoga became popular as a system of physical exercise across the Western world.[15] Yoga in Indian traditions, however, is more than physical exercise, it has a meditative and spiritual core.[17] One of the six major orthodox schools of Hinduism is also called Yoga, which has its own epistemology and metaphysics, and is closely related to Hindu Samkhya philosophy.[18] 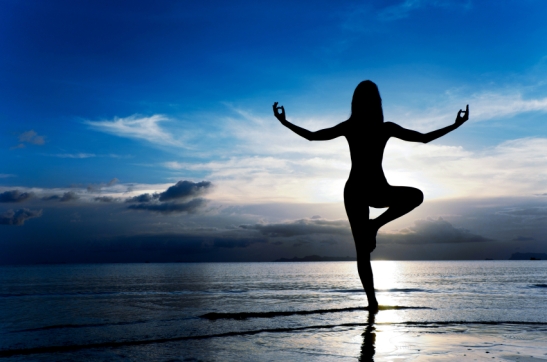 My Practice of yoga has been on and off for the last 10 years.  It was at a yoga class at the Y that I first fell in love with the practice and have enjoyed it ever since.  I have never been athletic – so lots of physical activities I fall short in, but in yoga it’s different.  There are a few reasons I love yoga so much; it’s spiritual, in the practice of yoga you concentrate on your breathing, you center yourself and you are mindful of your body and your surroundings, when I practice yoga I see improvements almost immediately, and when I finish my hour of yoga it feels as if I have had my whole body wrung out (in a good way) !  I feel much less stressed, my muscles are relaxed and stretched and I have found my center.  It was during yoga classes that I first learned to truly relax my body, I often suffered from insomnia so being able to relax on cue has been tremendous.  At the end of each yoga class  you lie in relaxation pose – (Shavasana) with your eyes closed and meditate – this is where I learned to flex my meditation muscle!  Learning to meditate at the end of a long tiring practice allowed me to transition into a longer meditation at home.

So I am grateful for my yoga practice and encourage you to try one too!